Fertilization is the fusion of an egg and sperm cell to form a zygote.  The most primitive form of sexual reproduction is external fertilization.  It is used by simpler animals such as frogs and fish.  In external fertilization, the eggs are fertilized outside the bodies of the parents.  These animals must return to the water to reproduce.  Usually the eggs or roe are released into the water by the female animal.  Then the male releases sperm or milt into the same area.  Sometimes a crude nest is constructed, but more often than not the eggs are just released onto the gravel or in open water.

The fish pictured below is a lake trout.  Unlike other trout species that construct “reds” (spawning beds or nests), these fish spawn in fall or early winter over rubble or gravel, usually at night.  Several males fan a section of lake bottom clean of fine silt.  One to three males court a female, nudging her body to cause the release of her eggs.  Collectively, the males release milt over the eggs which fall to the swept lake bottom.  Because of low water temperatures, the unattended eggs usually take 4 to 6 months to hatch over the winter.

The eggs are on their own from this point on.  The embryos which hatch from them must fend for themselves right from the moment they hatch.  Young fish who meet their parents will likely be eaten by them!  In fact, less than one hundred fish eggs grow to adulthood.  This is why two northern pike must produce one to two thousand eggs just to replace themselves.
Higher more evolved animals such as snakes, dinosaurs, birds and a few mammals (i.e. the platypus) use an amniotic egg so that they can lay eggs on land.  The amniotic chicken egg represents a sort of life raft for water animals.  The chicken embryo is an aquatic animal just like the young frog tadpole.  It lives in water and must breathe in water.  So, in order to lay their eggs on land, the chicken produces an artificial pond around its embryo.  The artificial pond is the egg white.  The yolk is the food supply, and the embryo forms on the surface of the yolk.  The problem is to keep the pond from drying up before the embryo is ready to live on land.  To avoid this problem, these animals put thick, waterproof shells on their eggs.  But this means that the egg must be fertilized before the egg leaves the body.  After all, if water can’t leak though the shell, you can hardly expect a sperm cell to get in it. This means that the sperm must be placed inside the female’s body so that her egg cell can be fertilized before it has the shell put on it.  This is called internal fertilization. 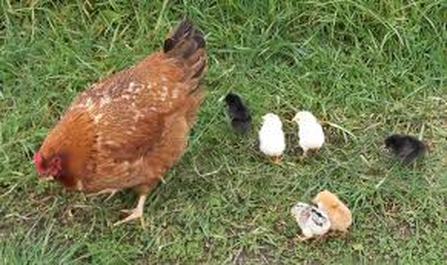 Internal fertilization has several results:  1) since the sperm and eggs now have less trouble finding each other, there is no need to produce so many,  2) since fewer eggs are produced and they cost the female more time and energy to make them, it becomes important for the parents to look after their children to ensure they survive.  In most reptiles, the eggs are simply hidden under logs or buried underground.  Some more intelligent reptiles, such as crocodiles, guard the nest for  a period of time.  But birds (and apparently dinosaurs) spend (spent) a great deal of time and energy caring for their young and even spend (spent) time caring for them after they are hatched.

Human beings belong to a group called placental mammals. These are animals who keep their embryos inside their bodies in a special area called the womb.  This allows the young animal to spend more time growing in safety, and means that they are more prepared to survive when they are born.  A young caribou can outrun a full grown human within a few hours of being born; this is a necessary defense against predators such as wolves and bears.  It is necessary for placental mammals to use internal fertilization because the egg cannot be released to the outside world.

Mammal embryos are also called “pond organisms” as the developing embryo is surrounded by a bag filled with amniotic fluid.  This is the “water” that “breaks” just before a baby is born.


To see the original handout click on this link.  www.gov.mb.ca/conservation/sustain/srdone.pdf‎