Fertilization is the fusion of an egg and sperm cell to form a zygote.  The most primitive form of sexual reproduction is external fertilization.  It is used by simpler animals such as frogs and fish.  In external fertilization, the eggs are fertilized outside the bodies of the parents.  These animals must return to the water to reproduce.  Usually the eggs or roe are released into the water by the female animal.  Then the male releases sperm or milt into the same area.  Sometimes a crude nest is constructed, but more often than not the eggs are just released onto the gravel or in open water.
External fertilization occurs mostly in wet environments and requires both the male and the female to release their gametes into their surroundings (usually water). An advantage of external fertilization is that it results in the production of a large number of offspring. One disadvantage is that environmental hazards such as predators greatly reduce the chance of surviving into adulthood. Amphibians and fish are examples of animals that reproduce this way.
The fish pictured below is a lake trout.  Unlike other trout species that construct “reds” (spawning beds or nests), these fish spawn in fall or early winter over rubble or gravel, usually at night.  Several males fan a section of lake bottom clean of fine silt.  One to three males court a female, nudging her body to cause the release of her eggs.  Collectively, the males release milt over the eggs which fall to the swept lake bottom.  Because of low water temperatures, the unattended eggs usually take 4 to 6 months to hatch over the winter.

​The eggs are on their own from this point on.  The embryos which hatch from them must fend for themselves right from the moment they hatch.  Young fish who meet their parents will likely be eaten by them!  In fact, less than one hundred fish eggs grow to adulthood.  This is why two trouts must produce one to two thousand eggs just to replace themselves. 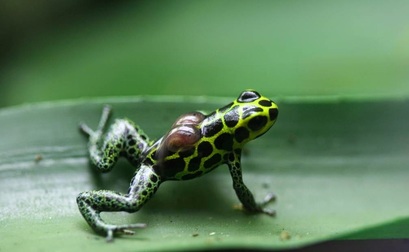 Did you know that there are frogs that carry their tadpoles on their backs?  You are probably well aware of the life cycle of most frogs. They lay their eggs  in water and when the tadpoles hatch they are on their own with no parental  intervention. The lucky few will develop through this larval stage in to frogs.
UA-119693884-1